A one tube radio receiver using a magic eye tube

I was recently asked by a reader and amateur radio operator from Brazil if I had a circuit for a one tube receiver using a magic eye tube.  I did find such an article online called "Build the Cyclops" which seemed to be exactly what he was looking for.

Being naturally curious and also feeling like this is something I ought to look into, I began to do some further reading about regenerative sets and I began to gather parts for the project.  I found a couple of old tuning capacitors, a coil from an old TRF set, and the miscellaneous other parts needed.  After finding a suitable piece of scrap wood, I began to build my prototype using a readily available 1629 magic eye tube, a 1.5 megohm grid leak resistor in parallel with a 100 picofarad capacitor.  I put the set together rather hastily and did not pay too much attention to details figuring that I can always do a better job later.

After some experimenting, I found that I had to reverse the wires to the "tickler coil" and tap my tuner coil to receive stations on the high end of the broadcast band.  An anode voltage of 135 volts and a plate resistor of 270 kilohms seemed to work optimally.

My expectations were not very high, but I was very happy with the performance of my set and really had fun working with it and trying to tune in various stations.  The movement of the eye is not as pronounced as on a superheterodyne set, but it is noticeable and varies with audio strength as well. 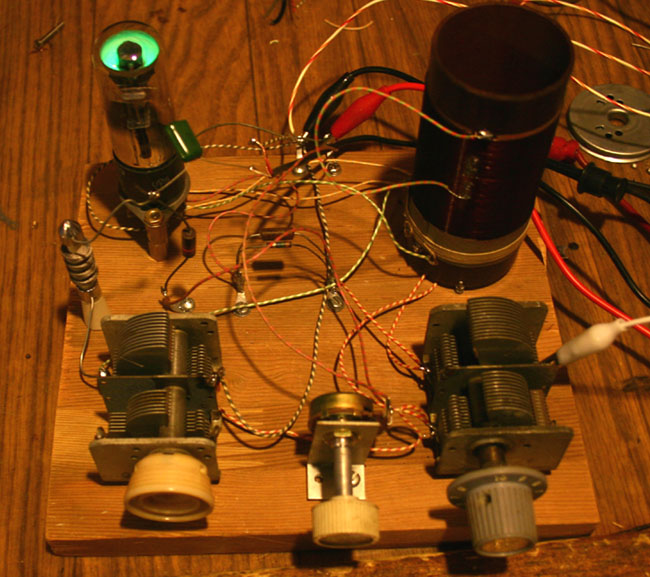 I expect to experiment more with this set, trying different types of magic eye tubes, probably types like the EFM1 or EFM11.  I also want to experiment with the antenna and try to wind some coils myself in an effort to receive some shortwave stations, and lastly I will find or build a suitable enclosure.

A reader recently sent me an email asking me if a magic eye tube could be powered by a 6 or 9 volt battery.  I thought about it for a while, trying to figure out the most practical way to obtain the high voltage needed for the target.  Instead of designing a specific power inverter circuit, I resorted to checking my junk box (actually my junk basement) and found a box full of CCFT inverter blocks I had salvaged from some POS terminals.  I was unable to find any statistical data on them, but by experimenting I was able to make the magic eye tube light up with a minimal amount of external components. 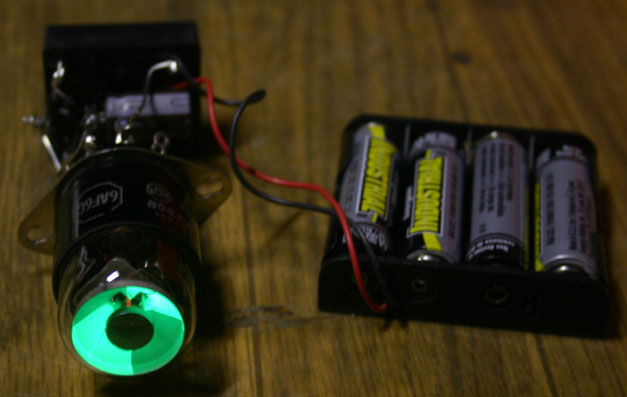 After assembling my prototype circuit, the magic eye tube ran successfully for eight hours drawing about 190 milliamps.  Above is the schematic for my circuit, which I hope will open the door for many other creative opportunities for use of the magic eye tube.